With the exception of the gentle sound of water rushing through pipes, plumbing pipework shouldn’t make much noise. The problem can occur on either cold water or central heating pipework. If you hear a mechanical or banging noise whenever you open or close a tap or valve don’t ignore it. 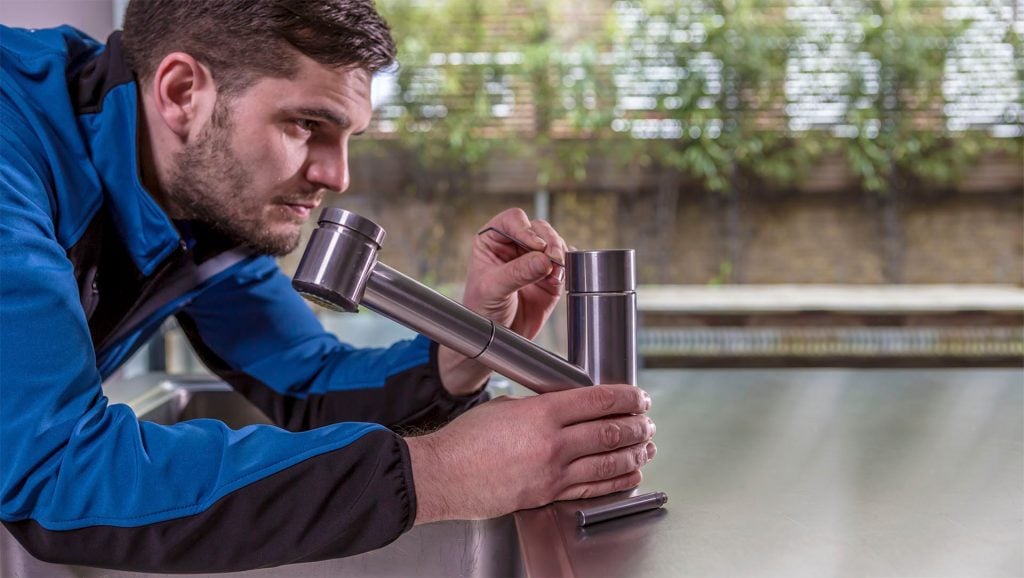 What causes plumbing pipes to make a banging noise?

If you hear a vibrating, banging or pounding noise when taps are turned on or off it’s usually due to hydraulic shock in your plumbing pipework. Hydraulic shock is more commonly known as “water hammer”.

The banging noise you hear is the result of vibrations in pipes. The vibrations are caused by a surge of pressure in the plumbing system when a tap or valve is opened. Sometimes, water hammer can be created when a vacuum is formed behind water. If water continues to flow quickly after a valve behind it (upstream) has been closed, this could create a vacuum. The faster the flow of water through the pipes, the greater the shockwave and vibrations that are created.

Modern plumbing taps and valves aren’t designed to stop or start a full flow of water instantly. One of the common reasons for hydraulic shock to develop over time is wear on a tap or valve. The seating inside the valve begins to jump which causes water pressure to increase rapidly.

It’s not always the case that taps or valves closest to the noise are the ones causing the problem. For example, it’s not uncommon for a faulty kitchen tap downstairs to be the cause of hydraulic shock upstairs.

Do I need to get noisy pipes fixed?

Hydraulic shock can be created in either metal or plastic pipework. It’s usually more obvious in metal pipework due to the capability of metal to transmit sound more effectively than plastic. Anyone who suspects they have a hydraulic shock issue should contact a qualified plumber or heating engineer as soon as possible. They’ll be able to resolve the issue.

The rapid pressure increase, and resulting vibrations, stresses the pipework, joints and fixings. In severe cases of hydraulic shock pipes can rupture and cause water damage, or possibly flooding, inside your property. If the banging noise in your pipes has increased over time it means that vibrations have increased. An increase in vibrations will also increased the likelihood of rupture.

What can be done to stop the banging noise?

An experienced plumber or heating engineer will be able to diagnose the cause. They’ll make subsequent changes to the plumbing system to stop the problem. Steps can be taken to slow the flow of water where the pressure build-up is occurring. Fitting new valves that close slowly and/or a hydraulic shock arrestor will fix the problem. Other steps such as checking plumbing pipework is fixed securely in place will help to prevent movement in the future.

Finally, it’s worth mentioning that some combi boilers seem to be affected more by water hammer than others. When this happens, fine cracks can appear within the manifold which will result in leaks.

Next: How to sell a house with a missing Electrical Installation Certificate

Need more info before booking a plumber? Someone from our team can call you.  Request a callback

More about our plumbing services

Our plumbers can be booked for a wide range of tasks. Read more about the range of services we provide here: –