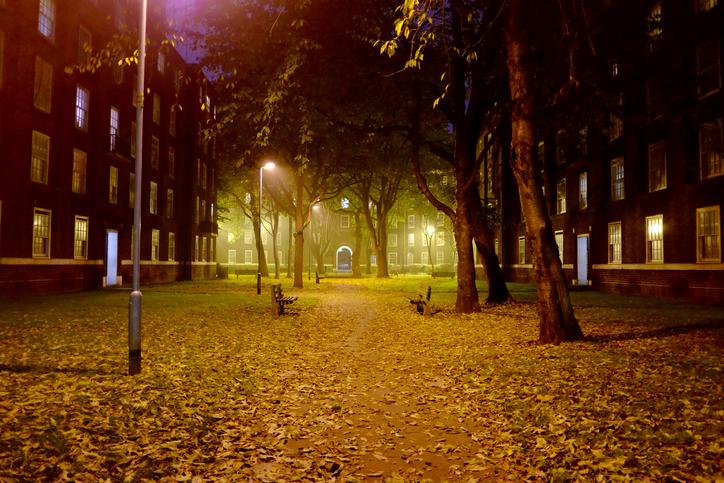 Are banging pipes, creaking timbers or dank odours bothering you this halloween?

64% of UK residents feel ‘unsettled’ in their homes due to unexplained issues, according to a nationally representative study* of 2,000 UK adults.

The study, which asked UK residents to talk about different issues around their home, found that unexplained knocking and tapping sounds, cold spots and even rooms with a ‘strange aura’ were among the most common causes of Brits feeling unsettled at home. Unpredictable electrics and unusual smells were also a cause for concern for the UK’s spooked-out residents.

While attics and basements might seem the most likely places for unsettling vibes, it’s actually the UK’s bathrooms that are giving most people the creeps, with odd noises and unexplained chills being the biggest complaints.

After bathrooms, the UK’s spare bedrooms, kitchens, hallways and main bedrooms are the most common sources of unsettling household problems.

Leeds has the most troublesome homes. 75% of residents in the Yorkshire city said their home had them feeling on edge. Belfast, Glasgow, Cardiff and Coventry were the cities with next most unsettled residents.

Things that go bump in the night…

Although things may not be as bad as they seem for the UK’s unsettled home owners and tenants. Property maintenance expert Nick Bizley, director of operations at Aspect, says even the most unsettling problem normally has a relatively simple explanation.

While some issues can be resolved without too much knowhow, homeowners would probably need the assistance of skilled tradespeople to fix the majority of problems.

Nick says “It’s certainly that time of year when our homes start to cause us problems. For example, electrics like lighting and electric heating are being used more and people are starting to use their central heating after several months of no use, so there’s more demand on the home’s appliances and systems.

“Plus, the nights are drawing in and the weather’s getting colder. This can highlight certain problems around the home, especially as households start using their heating more frequently. And when you add the unsettling tapping, knocking and creaking sounds, cold spots and strange smells, it’s no wonder a lot of people are complaining of ‘spooky’ phenomena making them unsettled.

“However, most of the things that can make a home feel like this can be explained quite rationally and fixed if necessary. Knocking and banging from pipes, especially after taps have been shut off, is most likely due to high water pressure. It could also be due to the build-up of magnetite (a dark sludge) in a central heating system.

“And there are a number of explanations for rooms, or specific parts of rooms, that always seem chilly. Radiators that need bleeding, draughts and poor insulation can all cause this to happen.

“Strange smells are a little harder to diagnose, because the potential causes are so varied. A constant ‘musty’ smell could be the result of damp conditions and the growth of mould caused by poor ventilation. This is more likely if it’s a room that gets less use and receives less natural light and fresh air from outside, such as a spare room or the loft. If the smell is more distinct, for example an unpleasant rotting or ammonia smell, it could be a sign of pests, such as mice. Blocked drains can cause a very strong and unpleasant smell too.”

Most likely cause – water pressure is too high

Nick says: “Knocking and tapping of pipes can happen anywhere in the home. The reason it’s probably more pronounced in bedrooms is because people are more aware of sounds when they’re trying to sleep and other sources of noise such as traffic and TV aren’t drowning them out. Pay attention to when you hear the knocking and tapping. If it happens as water is running, or just after the taps have been shut off, it could be linked to water pressure. When the pressure is too high, the water can move the pipes, causing them to knock against their fixings or each other. Always consult a plumber who specialises in heating and hot water when faced with pipe problems.”

Most likely cause – timber joints retracting in cold weather

Nick says: “As the temperature drops around the UK, the timber within the structures of our homes begin to contract. This is entirely normal. You’re most likely to hear these sounds at night when the general hum of the home quietens down.”

Most likely cause – poor wiring or loose connections

Nick says: “Kitchens can suffer from electrical problems because that’s where there are lots of appliances that use a lot of electricity, such as kettles, microwaves, electric ovens/hobs/grills and toasters. If they’re all on at once a circuit could get overloaded and trip. The only advice I’ll give here is to call in a qualified electrician. If your light switches or plugs ever behave in any way they shouldn’t, for example sparking sockets or flickering lights, it’s a job for a professional. This doesn’t mean it’s necessarily a big problem, but I’d recommend that only qualified tradespeople should be working on electrics.”

Most likely cause – poor insulation, draughts or radiators that need bleeding

Nick says: “If the problem affects an entire room, check that the radiators are working properly. Feel the top and bottom for comparison. If the top is colder than the bottom, the radiator could need bleeding. This is quite an easy job to do yourself. You can get a radiator key from most DIY shops for about £1. And there are plenty of videos online to show you how. As long as you follow the steps carefully and make sure you’ve got something to capture any drips from the valve, it should be fairly straightforward. It’s not normally necessary to call a plumber.

“Draughts are a common problem for cold spots. Fitting draught excluders around windows and doors will help. Draughts will also come up through gaps in floorboards which should be sealed. Inefficient double glazing or single glazing will make rooms feel cold too. Bathrooms suffer from cold because people step out of a hot bath or shower and are instantly more aware of draughts, possibly from ventilation that’s in place to help reduce condensation and prevent damp conditions for mould to grow. Draught excluders can be fitted to ventilation ducts. Don’t be tempted to block ventilation and prevent air exchange.”

Nick says: “Most smells can be explained. If you’re noticing a new or unusual smell, it can be unsettling. If you detect the smell of fish, it could actually be your electrics. Electrical shielding, when exposed to high heats, can give off an odd ‘fishy smell’. In fact, ‘why do my electrics smell of fish is one of the most Googled’ questions people make about their homes, along with ‘is my roof leaking?’

“Drainage issues can cause some pretty nasty odours too. Blocked sinks and blocked soil pipes in particular can lead to some pretty strong, bad smells.

“If you’re detecting the whiff of ammonia, it could be a sign of vermin. And if you’re noticing a smell similar to rotting cabbage, that could be a pest that’s died under floorboards, inside a wall or behind the skirting board. If you suspect that mice are getting into your home, in search of warmer conditions, I’d recommend calling a professional pest controller. They’ll assess the extent of the problem, recommend a suitable treatment, and provide proofing measure to stop pests from returning again.”

Want to know more about our home maintenance services?

You can book our experienced tradespeople for a variety of jobs. Check out some of the services we provide: –

COVID-19 Update: We’ve briefed and equipped our tradespeople in response to the coronavirus crisis. Read our policy.