Interest in skilled trades spiked on August 15th 2019, the day that most students in England and Wales received news of their A-Level results.

According to Google Trends data, electrics appeared to be the career most searchers were interested in, as search traffic for phrases such as “electrician salary” and “electrician apprenticeships” more than doubled on the that day A-Level results were released in England and Wales, compared to the day before.

On the day hundreds of thousands of students received their A-Level results, the media reported that for the first time in 12 years the number of top grades fell and that fewer students would be heading off to university. According to PA Media (formerly the Press Association), 348,890 UK students were accepted onto university courses, a 1% drop compared to 2018.

The image below shows a spike in UK search traffic for queries related ‘electrician training’ on the morning of August 15th.

This graph shows that interest in electrician apprenticeships spiked in the morning of August 15th, then twice again later in the day. 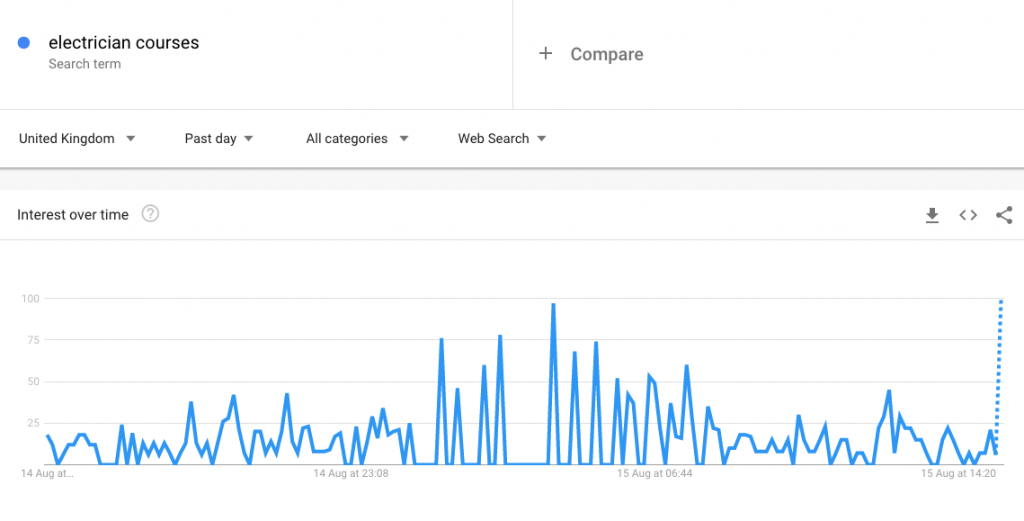 The graph below shows a similar level of interest in ‘electrician earnings’, suggesting some Internet users are carrying out serious research into a career as an electrician. 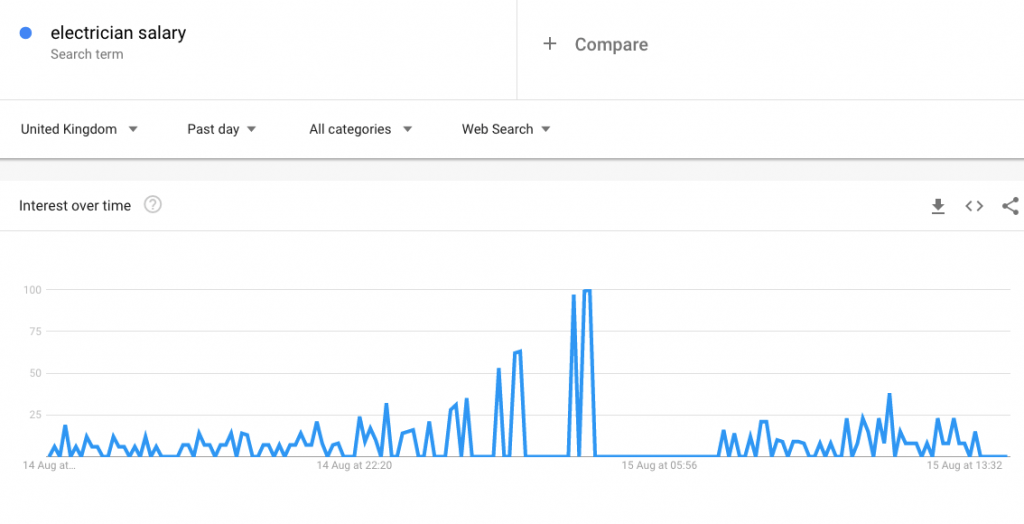 The graph below shows a steep increase in Google searches related to salaries for different trades, with a pronounced spike in interest for the search term ‘electrician salary’ in the days just before exam results day. This suggests a significant increase in interest from people considering a job as an electrician, and to a lesser but still significant extent, people considering careers in other trades, such as plumbing, locksmithing and bricklaying.

“There’s currently a skills gap in the construction sector, so it’s encouraging to see that people are interested in apprenticeships and training in the skilled trades. It’s interesting too that there appears to be a spike in interest in and around A-Level results day. This suggests that students are exploring their options more widely, which is always a good sign. If young people are taking A-levels and then considering an apprenticeship or vocational training, they’re equipping themselves for a rewarding and very worthy career. Good for them.”

Previous: Do You Suffer From Being In An Unpleasant Workplace Environment?

Next: Damp & Mould, Pests & Vermin: Is Your Home Making You Sick?