What you need to know about chemical drain unblockers

Does water pool around your feet as you shower? Maybe you have a slow-draining sink in the kitchen. Either way, it may just be a matter of time before your drains block up entirely. So what should you do? Your first reaction may be to go out and buy a bottle of drain cleaner. They’re available in most supermarkets, but given the huge amount of advice surrounding chemical drain unblockers, it can be hard to know which to use – if you should even use one at all.

Take it from the experts; there’s no single answer to the wide range of drainage issues. There’s only the best choice for the task at hand. Read on to discover the most common issues, what your options are, and what you should do when faced with a clogged drain.

What chemical drain unblockers can I use to clear my drains?

Some of the most popular brands of drain cleaner include Mr. Muscle, Drano, and Buster. They offer different products to suit the task at hand, such as kitchen unblockers for combating grease and food, and bathroom unblockers for dissolving hair and soap scum. Some products, such as Mr. Muscle Max Gel, claim to work for kitchen and bathroom plugholes alike.

You can buy expanding foams, gels that cut through standing water, and crystals that you mix with water. In our experience, no one type of drain clearance product is more effective than the others.

When should I use a store-bought drain unblocker?

Chemical drain cleaners are most effective early on when water starts to drain slowly. You should only pour them into your internal (primary) pipes, rather than into your external (secondary) drains. That’s because external pipes connect to the sewers, so they’re longer and wider than internal ones. In turn, they’re likely to dilute the chemicals, making the whole thing a pointless exercise.

Once a problem is severe enough to impact your external drains, chemical unblockers won’t be nearly as effective.

Tip: By using a chemical drain unblocker, you’re assuming there’s a relatively minor blockage in the u-bend or ‘trap’ instead of a major build-up further down the pipe. If a large mass exists in the system, other clearing methods will prove more effective.

Can I use chemical drain unblockers in my toilet?

We don’t recommend that you pour chemicals into the toilet. That’s because soil water pipes tend to be the same diameter as external ones. Chemical drain unblockers can also fly outwards when you flush. That’s why most trusted engineers will recommend manual clearance techniques for your blocked toilet instead of chemical-based ones.

Can drain unblockers cause problems?

Older homes tend to have steel or copper pipes, and these sometimes wear thin with age and everyday use. Chemicals could cause them to wear out even more, even forming a hole if they’re damaged enough. Newer pipes made from uPVC aren’t immune either, because many drain cleaners create heat (an exothermic chemical reaction) that can cause the plastic to warp out of shape.

It also depends on which chemical drain unblocker you use. Caustic soda or ‘lye’ (sodium hydroxide) is a type of corrosive unblocker that can eat away at uPVC pipes when used excessively. Unless the crystals fully dissolve and clear the blockage right away, they can harden like cement – creating an additional blockage. You may then need to replace the pipe entirely.

Tip: If caustic soda doesn’t work, don’t rush out to buy more. Pouring more of the same chemicals into the kitchen, bath or shower drain probably won’t solve the problem. All it’ll do is fill your drainage system with corrosive substances.

Alternatively, you could dry different soda crystals made from sodium carbonate decahydrate. This product is commonly known as ‘washing soda’, and while it should still be treated with respect, it’s gentler than caustic soda. It’s typically used for cleaning purposes, but it can also be used to clear minor clogs in sinks, basins, bathtubs and showers.

Attention! Never mix different chemicals when trying to clear your shower, bath or kitchen drain. Unplanned chemical reactions could take place inside your drain. It could release harmful gasses like chlorine, damage your drains beyond repair, or create smoke, fire, or an explosion in extreme cases.

How can I stay safe while using chemical drain unblockers?

If you decide to try a store-bought drain clearance product, we advise a safety-first approach at all times.

Always follow what the manufacturer recommends when using a store-bought drain unblocker. Ignoring these instructions could mean your attempts do more harm than good, and you might even suffer an injury.

Can I use a drain unblocker if I own a septic system?

Some big brands sell drain cleaning products that are safe for septic systems, but on the whole, you should avoid using harsh chemicals. That’s because septic tanks rely on bacteria to perform a natural kind of waste disposal. It’s very easy to disrupt this delicate balance, and chemicals could also damage the tank itself.

Try a gentler, enzyme-based drain unblocker that keeps the bacteria alive. It might not shift the most stubborn blockages, but it won’t hurt the environment either.

Can I use baking soda to unblock my drains?

Some websites tout the wonders of mixing baking soda with white vinegar for a more natural, drain-clearing reaction. You wait 30 minutes, then rinse it away with hot water. It’s sometimes considered a fast-acting home remedy, and a safe alternative to chemical plughole unblockers. The idea is that vinegar is acidic, so it cuts through grease, while effervescent bubbles from the baking soda work to shift debris.

This method can save you money, but success will be limited. The combination of baking soda and vinegar won’t travel far down the pipe, and it might just sit in the trap. While it may work for some smaller clogs, it’s far from a magical fix.

How can I manually unblock my drains?

Some people like to avoid chemical drain unblockers when they can. Sometimes, chemicals won’t be the right solution anyway. Here are some of the ways you can try to unblock your drains manually:

The blend of suction and air pressure can sometimes loosen the blockage, sending the material down the pipe and into the sewers. Be careful not to use too much force, as you could blow joints in primary pipework apart!

Fish the blockage out with a coat hanger

One method you could try is the ‘coat hanger’ trick. Take a wire hanger and then unwind it into a bendable line. Fold one end to form a hook, then feed it into the drainage system. Just be careful to pull the blockage out; you don’t want to compress it further.

Invest in a plumbing snake or auger

For a low cost, you can get a plumbing snake or ‘drain auger’ that features a steel cable and rotating drum. The cable reaches further into the pipes than a coat hanger, but it can be quite challenging to use around bends. A word of caution: too much force could break a hole in the drainage system!

This is one of the easiest ways to maintain your drainage system, but don’t try it if you’ve already used chemicals. Before you begin, place a bucket underneath the trap in case waste water pours out. You can then unscrew the trap and remove any material you find. This can be a very effective, if messy, way to clear out a minor blockage.

For your external drains…

You could try using a high-pressure washer from a brand like Karcher. Sewer-jetting heads are available that fire bursts of water, break up clogs, and help to clean pipes. Remember, water jetting is only for outside drains, and you should never jet the primary pipework inside a property.

Drain rods, although readily available, can easily get lost in the drainage system and prove difficult to remove. That’s why it’s best to leave rodding to the professionals.

What should I do if chemical drain unblockers don’t work?

If you’ve used a bottle of store-bought chemicals and still have a blockage, it’s probably time to contact a professional. The same rule applies if you remove a clog only to find it comes back just a few weeks later. You should contact an engineer if you lack the tools, confidence, or safety gear to use manual clearance tools. We also recommend you call an engineer for external drain cleaning.

Attention! For safety reasons, tell your engineer if you’ve already used chemicals. Acids can spit up from the basin or fall out of the trap once they get to work – burning their skin or clothes in the process.

What drain clearance methods do engineers use?

Drainage engineers use specialist equipment to get the job done. This includes:

Your engineer won’t assume the blockage is in the trap. Instead, they’ll investigate the problem, and have the means to clear the blockage no matter its location. They can even use camera equipment to get visual confirmation of the problem, check that it’s gone, and make sure no further issues exist.

How do I maintain my drains effectively?

Below, we’ve listed a few easy ways to keep your drains healthy and flowing. 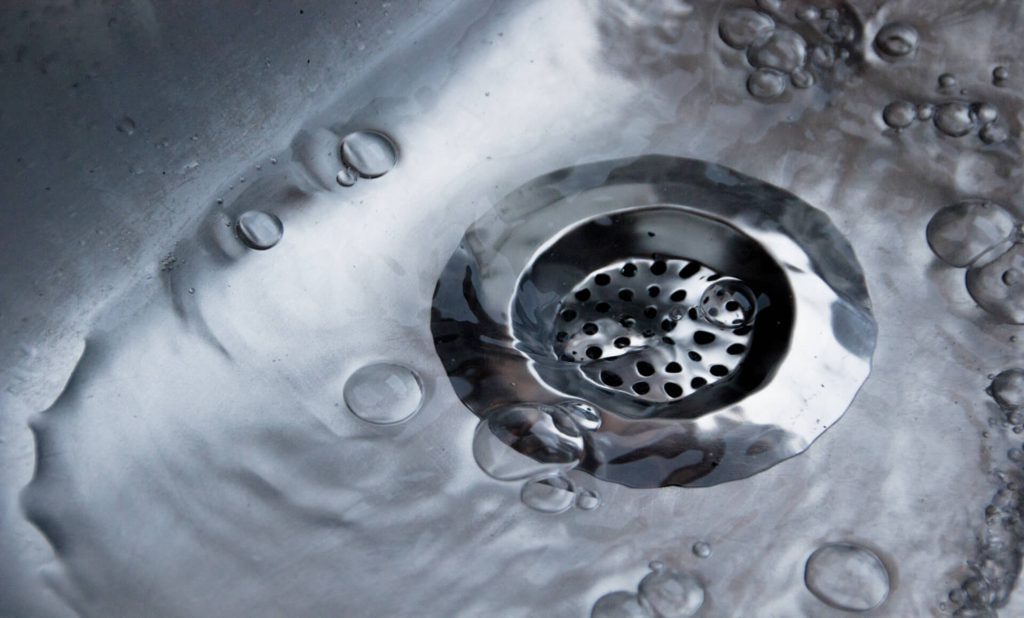 Bonus Question: What are the weirdest things found in drainage systems?

When carrying out drain clearance jobs, we’ve found some interesting items lodged inside drainage systems. These include candle sticks and diffusers, work uniforms, and even a woman’s engagement ring that we successfully rescued!

We’ve also had customers empty their cat litter trays into their drains. Even non-clumping litter will stick together in the system, causing a massive blockage that demands professional care.

Give us a call! Whether you’re confused about drain unblockers or have a slow-draining sink or bathtub, Aspect can help. We’re experts in drainage clearance and can remove any blockage using proven methods.

Previous: Why you should consider a pre-purchase drain inspection