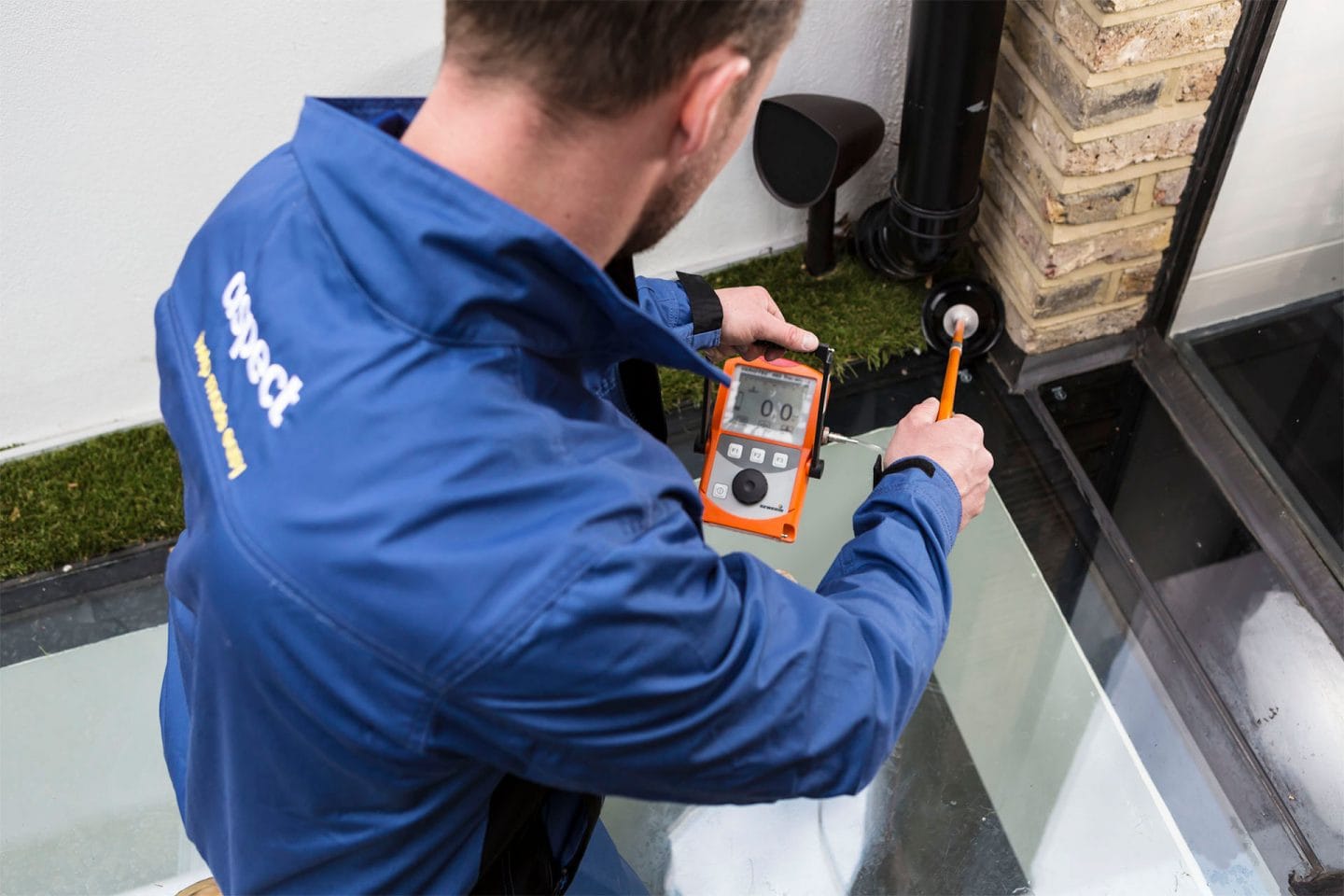 The experts we schedule to investigate underground water leaks are plumbers with years of experience. It means that when they find a leak, they’re able to start repairing it straight away. Whether you have an underground mains water supply pipe leak, or a leak in any underfloor pipe inside a property, you’ll find their specialist trade knowledge invaluable.

Following the investigation, a full report is provided as part of our thorough underground leak detection service. A scope of work and fixed price quote to cover all repairs and reinstatement can accompany this. We try to provide as much help as possible to customers who are submitting a claim to their insurance company.

With availability throughout London and the Home Counties 7 days a week, we can schedule a leak detector visit for you quickly.

WATCH: How we find underground leaks

This video shows some of the non-invasive techniques used for finding underground water leaks.

In this example, our tradesperson is investigating an underground leak outside the property. The same techniques could be used if the leak was indoors, for example buried beneath floorboards or a tiled floor.

Every investigation is different. Our tradespeople decide on the methods to use based on the evidence available to them and the results they get from each test.

Leaks in water pipes that are buried underground are sometimes referred to as “slab leaks”. We can detect and repair all types of water leak underground. It doesn’t matter if they’re buried beneath soil, paving or a concrete slab.

Unlike most indoor plumbing leaks, where there are usually visual signs of water damage to your home, an underground water leak may not be immediately obvious. An unexplained high water bill is usually the first indication of a problem. If a leak is especially bad, an obvious drop in mains water pressure might also be noticed.

If an underground mains water supply pipe leak is suspected a simple test on the water meter can be done to check for it. The first step is to turn off the stop valve (or stopcock) inside the property. Secondly, a water meter reading is taken. If, after some time, a second reading is higher than the first it’s a clear indication of a leak underground between the water meter and the house.

If this test fails to indicate a leak, a pressure test on the internal plumbing system would be carried out.

These tests reveal whether or not a leak is present. Our leak detection experts are specially equipped to then pinpoint the location of it.

The traditional approach to finding a water leak underground would be to expose the pipe. Digging a trench would begin. Digging would continue until the leak was revealed. An excavation team would have to be scheduled. This approach could be time consuming, expensive and disruptive.

The high-tech methods we use means the location of a leak can usually be found without needing to dig. It can be started immediately. It isn’t disruptive and it saves time and money. Once located, digging to expose the leak for visual confirmation can be highly targeted.

A range of equipment is used as part of the methodical trace and access approach.

The line along where underground pipes have been laid can be marked. Specialist detection methods are used along the survey line.

Water that’s under pressure creates tiny vibrations when it escapes from a leak. Highly sensitive acoustic equipment is used to detect these vibrations. A microphone is placed on the ground and the vibrations are amplified as sound.

The microphone is placed in different positions along the survey line. Changes in the sounds detected allow our experts to pinpoint the location of the underground leak.

The technology works on small or large leaks. It can be used to detect underground water leaks in pipes made from any material. It’s so sensitive that a tiny leak buried several feet beneath a concrete floor can be detected.

Pipes are filled with a non-harmful, inert gas mix. A probe is used to detect the presence of this gas. When the gas escapes from the leak the probe sounds an alert as soon as it’s detected.

The gas is lighter than air and is able to penetrate soil, most floor coverings, and even concrete slabs. The gas doesn’t leave a residue. It’s completely safe to use on drinking water supply pipes.

This test is useful for detecting underground water leaks either when acoustic equipment can’t be used, or when further confirmation on the location of a leak is needed.

Other tests provide evidence of where indoor leaks are located. These include moisture surveys and water analysis (testing for salts).

We're fully trade accredited. Aspect is registered with Gas Safe and the National Association of Drainage Contractors (NADC). All our leak investigation experts are vetted and trade accredited. In addition, the Aspect Guarantee covers our tradespeople's workmanship for up to 12 months.

When you book and Aspect leak detection expert you can count on getting the professional expertise you're looking for.

Need more info on our leak investigation services? Someone from our team can call you.  Request a callback

Acoustic surveys can only be carried out on pressurised water supply pipes. Detecting leaks in underground drainage is usually carried out with CCTV camera equipment.

A camera is placed inside the pipe and provides live images to the operator. Faults along the pipe are clearly visible. Further evidence of a fault or leak can be collected with flow or dye tests.

Read more about how leaks are detected in drainage pipes using camera equipment.

As soon as our expert finds a leak the process for repairing it can begin immediately. Isolating the system will prevent further damage. Exposing the leak to assess the extent of the damage to your home or property is usually needed for an insurance claim.

A scope of work and fixed repair cost can be provided within 24 hours. It’ll cover both repairing the leak and reinstating the affected area to its original condition.

We’re happy answering any questions from your insurance company.

Our leak detection specialists can be booked to work anywhere in London. We’ve expanded our service area to cover most of the Home Counties too.

We can usually schedule a leak detection specialist anywhere in Surrey, Kent and Essex and most of Hertfordshire, Berkshire and Buckinghamshire. If you need a tradesperson outside of these areas we might still be able to help. Our scheduling team will check availability for you.

Submit a callback request and someone from our team will get in touch. We’re ready to help 24 hours a day, 7 days a week.

Our other leak investigation pages