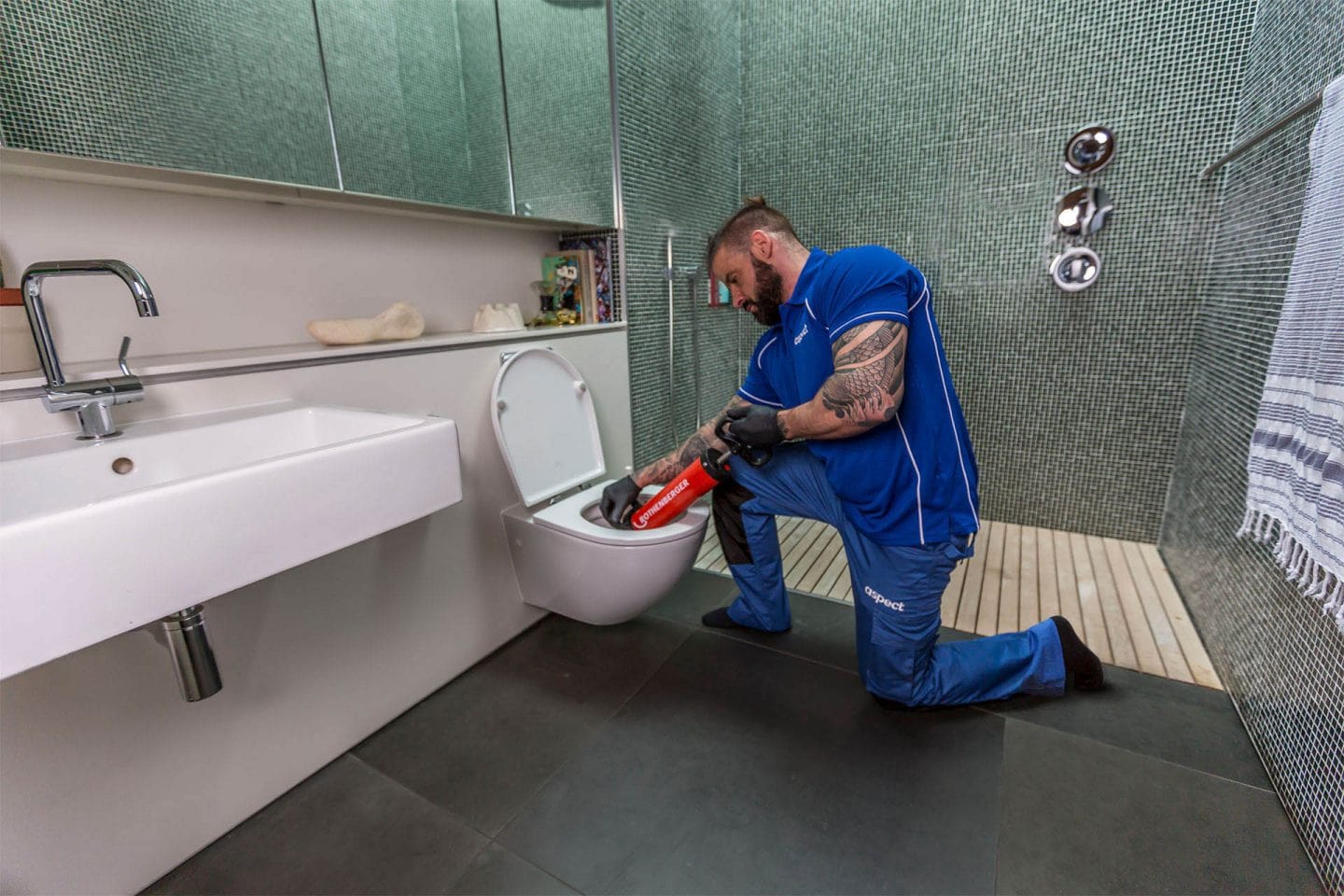 We understand how stressful it is when you have a blocked toilet in your property. That’s why we aim to have a specialist drainage engineer with you, wherever you are in London, to help clear the blockage as quickly as possible.

A blockage in a toilet can happen as a result of either the build-up of multiple insoluble items that have been flushed down a toilet over a long period of time, or a large amount of material perhaps from just a single flush. Depending on the severity of the build-up, it’s not always possible to clear it yourself with a plunger. In cases like this, we’re on hand to give you peace of mind and take on the job with specialist equipment for clearing blocked toilets.

Will flushing clear a blockage?

The simple answer to this is: not in all cases. If you simply flush a full cistern of water into a toilet that appears to be blocked it could easily overflow. What you’re doing here is taking the risk that the weight of water in the toilet bowl will be enough to clear the blockage. Which, unfortunately, it often isn’t if the blockage is quite solidly built up.

To most people, the prospect of trying to clear a blocked toilet is not a pleasant one. Even if you have a plunger and a pair of rubber gloves at hand, it assumes the blockage is within the trap rather than further down the pipework or in the soil stack. Frequently, this is not the case, but our team of specialist drainage engineers can clear blockages from these sites.

If you use an at-home method such as washing up liquid to lubricate the system and loosen the blockage, take care when you flush the toilet to check if the water drains away as normal – be prepared in case it doesn’t.

If you’d simply rather rely on a professional drainage engineer to help clear the blockage, we have tradesmen on call 24 hours a day, 365 days a year.

Our engineers carry specialist equipment that helps them clear the most difficult of blockages in toilets and soil pipes.

With water pressurised pumps, powerful electro-mechanical ‘sani-snakes’, and years of experience, they are sure to have your toilet working properly again in no time.

We have two rates based on the type of drainage work required:

Please note: If a wastewater booking requires work on soil water pipes, the soil water rate will be charged from the point at which the work moves from wastewater to soil water.

We’re fully trade accredited. Aspect is registered with the National Association of Drainage Contractors (NADC). When you book an Aspect drainage engineer you can count on getting the professional expertise you’re looking for.

Need more info before booking? Someone from our team can call you.  Request a callback

What can cause a blocked toilet?

One of the first signs that’ll tell you that you need to unclog a toilet is a higher than usual water level in the bowl. Anything that’s flushed down a toilet and doesn’t dissolve quickly in water can cause a blockage.

Although toilet paper is designed to dissolve quickly, it’s a common cause of blockages. The reason for this is usually an abnormally high amount of paper being placed in a single flush. Using multi-ply toilet paper can also be an issue as it takes longer to dissolve and break down.

Other common causes of blockages that our drainage engineers find, and are therefore things you should never flush down a toilet, are: –

Our engineers are frequently called to properties in London with broken macerators, which are devices in toilets that break down materials. Sometimes tenants living in rental properties don’t know they have them and are unaware of the damage that items listed above do to them.

If your toilet has become blocked due to something obstructing the moving parts of the unit, our drainage engineer can look at the cause. Sometimes an obstruction can be removed but if the unit is broken then it’s likely that it will need to be replaced.

We will be able to provide a fixed price to buy a replacement unit and install it for you. We have a huge network of plumbing suppliers throughout London, meaning we can get a new unit installed quickly.

Our other drainage pages

Our specialist drainage engineers can be booked for a wide range of tasks. Read more about the range of services we provide here: –