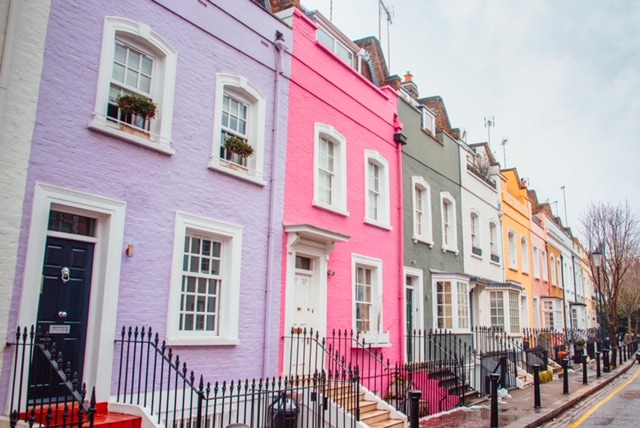 We’ve looked into the psychology behind home improvement and explored the influence of Airbnb, social media and Netflix

What is the Portobello Road effect?

If you’ve ever noticed certain streets in your neighbourhood looking somewhat ‘coordinated’ perhaps three consecutive houses with the same paint job, or a cluster of properties with identical shutters, doors or any other external stylistic flourish – that’s the Portobello Road effect. It’s named after the iconic London street famous as much for its pastel coloured Victorian terraces as it is for its street market.

Our research suggests that a number of factors are driving this. Social media has had a huge impact on home decor and maintenance trends. While Instagram gives us a curated glimpse into the most stylish homes for inspiration, Facebook lets us take a peek around the homes of our friends and neighbours, giving us a social motivation to make our own improvements. In fact, almost one-in-three UK adults say that they’ve been inspired to do something to their home after seeing a friend’s home improvement results on social media.

The rising popularity of short-term lets facilitated by websites like Airbnb are also causing homeowners, and even tenants, to make improvements. One-in-five adults say they’ve considered making their property more appealing to Airbnb tenants. Almost half of these are London residents.

Even TV has an influence. The recent popularity of Netflix show ‘Tidying Up with Marie Kondo’ has been a driving force for 15%, who admit that seeing the minimalist’s home makeovers inspired them to get to work on their own homes.

Although the Internet is responsible for a large number of different motivators, the two biggest drivers of home improvements and maintenance happen offline. 32% of UK residents surveyed say that being approached directly by a tradesman working on a neighbouring property has prompted them to make their own home improvements, while 41% say that seeing improvements to neighbours’ homes in ‘real life’ – also known as ‘curb appeal’ – has inspired them to make changes to their own homes.

“People have always been motivated to make the best of their homes and the habit of ‘keeping up with the Joneses’ never went away. What we’re seeing now are just different sources of inspiration for doing so. Whether we’re inspired by a picture on social media or a TV show, it’s great for the tradespeople we employ that UK residents still show so much pride in their homes.

“The study identified enterprising tradespeople as one of the biggest motivators behind people catching the home improvement bug and it makes complete sense. A tradesperson can make significant savings on travel, transport, access costs, scaffolding and they can bulk buy materials more easily when working on neighbouring homes. So they’re able to pass some of those savings onto their customers. It’s a win-win in that regard. The resident gets work done at a lower price, the tradesperson cuts their cost and the local neighbourhood benefits too as more and more properties enjoy improvements.”

What to know more about our windows and doors service?

Our windows and doors experts can be booked for a wide range of tasks. Read more about the range of services we provide here: –

COVID-19 Update: We’ve briefed and equipped our tradespeople in response to the coronavirus crisis. Read our policy.